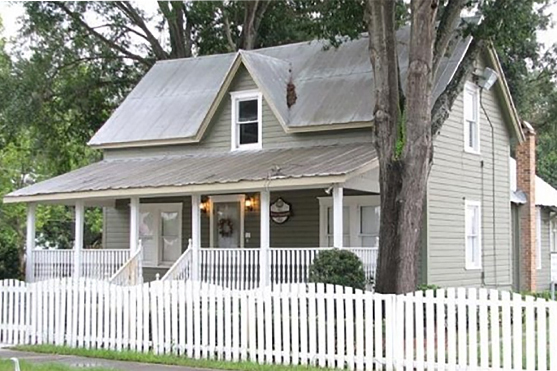 The Lancaster House, built in 1885, is the oldest remaining house in Historic Pine Castle/Belle Isle, and is one of the the oldest remaining houses in Orange County. The Lancaster House was built by Noah H. Grady who had come to Orlando to engage in the insurance business when the citrus industry was booming. There were back to back freezes in 1884/85 and Grady left in 1886.Currently the historic Lancaster House, located at the corner of Randolph and Waltham Avenues in Belle Isle, is in danger of being demolished. If you would like to see this important house preserved contact the Belle Isle City Council, Mayor, or City Manager.

The house was originally a two story version of the typical “dog trot” southern house, with two rooms downstairs separated by a hallway with a narrow staircase leading to two dormer rooms upstairs. Oldtimers who were interviewed in the 1970s said that it originally had a separate cooking room at the rear connected by a covered porch - and of course it had an outhouse.

Sometime later, perhaps in 1908 when the John’s House across the street was added, or during the Florida real estate boom in the 20s, the original cooking room was torn down and three rooms were added to the back, one of them a new-fangled “bathroom.”

In 1906, Mr. and Mrs Arthur Q. Lancaster acquired it and it became known as the “Lancaster House.” Mr. Lancaster was the first elected Mayor of Belle Isle.

The house was sold in 1919 to Mr. and Mrs. Don Harris, but it continued to be known as the Lancaster House until it was purchased by the Pine Castle Center of the Arts in 1972. The house then became known as the “Founder’s House” in honor of its primary sponsors, some of whom were Florence and Ben Fishback, Irene Day, Shirley and Blanch Cannon, Jack Holloway, and the Edyth Bush Foundation.

About 1980 the house and the five surrounding acres were purchased by the First United Methodist Church of Pine Castle and the house became part of the Pine Castle Christian Academy. In 2008 the property was purchased by the City of Belle Isle. When Cornerstone Charter School was established it became known as the Beacon House and was used for offices and storage.

This venerable old house has served the community well for 135 years and it is hoped it will be preserved and celebrated as Belle Isle’s “crowning jewel.”

This article is from our Aug 2020 issue. It is out now and available for download.

We can’t believe it! The fairies are back! The fairies have been spotted in the gardens gathering materials and building their special doors. The Enchanted Fairy Doors exhibit features twenty, one-of-a-kind, whimsical fairy doors which will inspire your child’s imaginative world of enchanted forests and secret gardens. Each door is created by a special fairy. All you have to do is find these beautiful doors and let your child’s creativity do the rest. A map of the fairy doors and a narrative of each fairy will be given out to every guests visiting the gardens. The fairy doors will be at Leu Gardens’ from August 1 – October 31, 2020.

Harry P. Leu Gardens’ mission is to provide a cultural resource that promotes the awareness and understanding of plants, the environment and the Gardens’ history. For more information please contact the Leu Gardens at 407.246.2620 or visit leugardens.org.

There are many edible plants that can be added to the home vegetable garden. Malabar Spinach, Chayote, Romanesco Broccoli, yard long bean, and Boniato are but a few you may have heard about. Many grow well in the Central Florida home vegetable garden. Learn about these and more unusual vegetables that may increase your vegetable garden productivity. You will receive “Florida Vegetable Gardening Guide” and “Ethnic Herbs and Greens Crop Production Manual” publications via e-mail. Registration is required. This is a free program.This class will be available through your home computer, Smartphone or listening on the home telephone. The Publications will be e-mailed to you and you will be sent a link to the Zoom presentation.

Visit www.gardenflorida.eventbrite.com for details and a listing of upcoming classes presented by UF/IFAS Extension professionals.